Jim had all ready booked print adverts with him, one being in full color.
Though before Jim can schedule the ads, BMXAction runs a feature in 1984 on the #1 Eric Rupe, though Rupe, in the article, states that he thinks Mongoose is out to win the team trophy with no mention of Profile. But at the end of the 4-page feature, they put his bike in an outlined box saying, “The Lone Ranger had Silver to get around. Batman had the Batmobile and Eric Rupe has his…” Well, it’s a total Profile bike. Champ Pro, cranks, hubs, etc…
Unfortunately, Rupe never came close to duplicating his #1 finish. 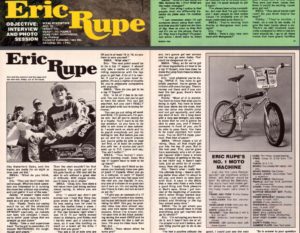 So, Jim runs the Rupe advert all the way through Dec1984 before going back to the black & white crank ad. In the following month, Richard Zagars (Profile Factory Team) starts getting press for Profile and in ’85 decides to go after the #1 BMX Race Factory Team trophy.